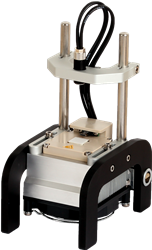 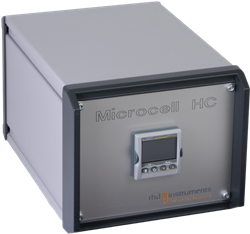 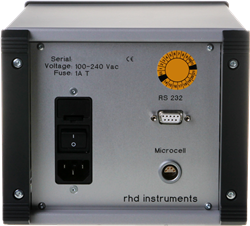 A temperature-controlled cell stand as the basis for all rhd instruments measuring cells.
The cell stand contains the peltier element for active heating and cooling of the measuring cell. It allows the hassle-free establishment of the cell connections to the potentiostat.
This package is compatible with all closed measuring cells. For open measuring cells, please see the Microcell HC Open.

The cell stand is intended to be used with all closed rhd measuring cells.
The scope of delivery does NOT include any measuring cells. These need to be ordered individually.

The Microcell HC Closed" is compatible with the following measuring cells: To perform long-term measurements at temperatures below -20 °C it is recommended to transfer the Microcell HC setup into the rhd Cooling Box. This avoids the formation of ice and makes it possible to reach very low temperatures. For measurements inside a glove-box, a suitable Cable-Feedthrough is required. Not every measuring device software supports controlling the Eurotherm thermocontrollers via the RS-232 Modbus protocol. Here, our Multisource Eurotherm device could be a proper solution.

The Microcell HC measuring system is perfectly suited for the electrochemical characterization of low to highly-viscous liquids, gel-like and polymeric as well as solid samples and of heterogeneous systems under temperature control. Depending on the measuring cell, the experiments can be carried out either in a two- or three-electrode configuration. In all cases, only a very small sample amount is needed (several measuring cells only need an amount of a few milligram). Hence, even substances which are only available in small amounts or are expensive can be characterized.

In contrast to the Microcell HC Open system, the measuring cells supported by the Closed variant are both sealed against moisture and air. They can be prepared inside a glovebox and then placed on the Microcell HC Closed cell-stand outside. This allows the handling of sensitive samples while still allowing measurements in the ambient athmosphere.

Cookies are used to store information like your shopping cart. We do not use any tracking cookies. You can decline the storing of cookies, which are then subsequently deleted once you exit the browser. In this case, you will loose the stored information, e.g. your cart.
Accept Cookies Decline Cookies
More information